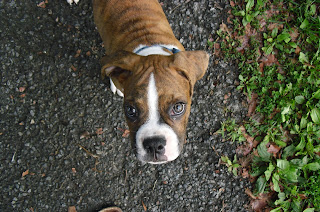 Here's our new pup, Sarge, who we are training the old fashioned way, no crate.  Nothing like a puppy to take my mind off losing my best friend, Otto, a few weeks ago.  I NEEDED a dog, and we found a non-puppy mill breeder an hour or so away and selected Sarge for his inquisitive, friendly and laid back manner.  Actually, his whole litter was the same except the runt, who looked so much like Otto as a pup.  She was feisty as all get out, starting fights with everyone, and I just felt that a more laid back pup would fit with us better.
So Sarge left his nice Amish barn that he shared with his pack and several horses and came home with us.  His breeder is a pro, she'd been breeding dobies for years, and since she and her husband retired from farming, she decided to add another breed to her repetoir.
So she aquired two new pets of her own, Sarge's mom and dad, and they produced 10 pups their first try!  We got Sarge nicely socialized, since her large extended family included grandkids of all ages who played with them, and cats and horses and men, like I said, she knows how to breed and raise good pups and it shows. 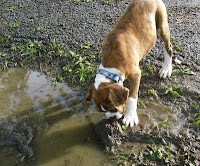 Sarge did smell like a barnyard, though, so he got a good bath his second day with us.  Looks like we could have waited, he loves this mudpuddle!
Everything was new to Sarge, a real culture clash.  Car rides, t.v., radio, cell phones!   He loves a walk, but not the leash.
My aim is to have him do his business on his twice daily walk.   First step, of course is to do it outside the house!  We do not own or plan to own a crate for him.  I know it's the current trend in dog training.  But dogs have been trained to behave in the house long before there were crates, and Sarge will be one of them, just like every dog I've had in my life.
I'll be honest with you.  I don't like crates.  If you do, that's your business but I think they are contrary to a dog's nature and when I hear of dogs who love their crates, it makes me cringe.  I hope Sarge's adventure in being socialized cage free will inspire others to learn how to do it.  There's very little info on raising a "free range" puppy on the internet, I notice.  Now, we do have a large kitchen and that's where Sarge will be kept when we have to leave him until he is trustworthy.  So it's like a giant cage, but he gets to play, look out the window, move all around and guard his little domain.
Of course, it takes a ton of time and attention.  I can't imagine doing it without taking at least a week of "maternity leave".  I admit I'm very very lucky that I work from home, being a pet portrait artist, but we were able to accomplish the same with our other beloved dogs, Gussie and Otto, when I worked full time.  We paper trained them first, but since Sarge was almost 12 weeks old, I figured we could move right to outside, being that he had the maturity physically and mentally to grasp what we wanted him to do.
I thought we'd be rolling up the rugs for a week or so, but he caught on really fast.  Just take him outside every hour, and praise the heck out of him when he finally does his job.  I say "let's go outside to potty" and when I put him on the grass, I say "Go ahead, go potty".  Whatever combo of words you want to use will work, just use the same ones.  When he goes, "Good boy, go potty!!!"  Then we run back inside and get a treat.
The other "trick" is to not let him have the run of the house yet.  I keep him in eyeball distance, even taking him to the bathroom with my while I shower.  Letting him get into the habit of finding a hiding place is not a good idea!
So basically, this week, we are just getting him used to always doing it outside and not letting him in til he does and keeping him with us to keep an eye on.  He's learning:
1.  I go outside.
2.  I can come back in when I'm done.  But not before.  And she can wait a looooong time!
3.  She really thinks I'm swell when I go!
He's had a few accidents the first days and we just said "Uh, uh!" and picked him up and put him outside.  Boxers especially respond to positive, not negative, reinforcement, I learned.  So I'm doing the "Praise twice, correct once" method I used with my human and dog kids.  Always correct, but praise the heck out of good behavior!
Keeping him with us is important for other training, too.  He's learned Mom gets REAL MAD when he tries to bite a cord, that shoes are not for biting, but toys ARE!  That you can sit with Mom when she's working, but you can't paw at the computer, or try to eat the paper she's drawing on!  And that in this house, dogs are allowed on the couch, but not on the tables.  And that jumping up is bad manners!  Yes, he is exhausting me!!!!  But a good week of one on one is important, so I'll be skipping my auctions and estate sales this week where I buy for my vintage online shop at Etsy.
Thanks for stopping by my art and animal blog!  I'll share artwork here, too, but you can see, I'm all about Sarge right now!!
Posted by Robin at 6:26 AM

i've used a crate for some dogs, but not for all of them. it was never a place they were put when they were bad, i can't stand people that do that :/ we have a crate but don't use it as our collie doesn't like it and there is no reason to use it, she has picked up everything so fast. we did use it with our rottie until he stopped chewing on cord at night. only took a few days thankfully.
its not harder to not use a crate, i do wish people would use them less. you just have to pay more attention to the dog and what you would like it to do. took us 2 days to train Sky using "go pee" and now there is no problems. people found it odd at first that we had a command to tell her to pee, but once they saw she actually listened they thought it was a good idea.
collies are so timid that any kind of verbal discipline makes them scared :/ so you have to be careful when you do and then really praise them when they are good (which she is most of the time, sometimes its scary how smart she can be :p)
oops sorry long comment :p

Oh, I am glad to read it. I hear Boxers are also of the correct gently crowd and so I've been working on being a nice lady!