Sarge on his birthday - training without a crate 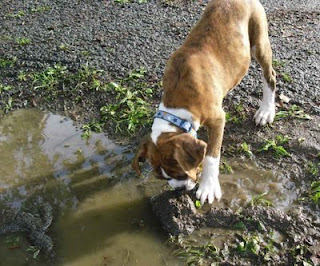 Yesterday was Sarge's 12th week puppy birthday, and he celebrated by pooping on his walk!  Which is where I want him to go, I would rather pick up after him right then and there than have to go on a hunt in the back yard.  He's peeing almost the moment he gets outside, now.

He also pooped in the dining room, and seemed totally oblivious to my "correction".

I've also changed his diet from the canned doggy food he got from his breeder to the home cooked meals he'll be getting for the rest of his life, supplemented by some kibble.  Yesterday he had a nice chicken/rice and vegetable blend, and that firmed things up a bit!  I don't think he'll need to go as often, and that should help ...um...solidify .... the notion that he goes when and where we want him to.  I don't want him to get into the habit of "I can't wait", so the rice will help.  I'll keep tabs on it though and adjust the rice to chicken and veggies ratio if need be.

We know he can hold it for 8 hours, since he sleeps through the night without having to go.

Anyway, I wanted to go to an auction to hunt for vintage to sell in my Vintage Shop on Etsy, so had to decide if I should leave him alone in the house or take him.  I decided to go for the outdoor portion of the sale, which lasts between an hour and two.  He did great with the crowd!  So I got some really really neat vintage things and he got some kids playtime and met some other new dogs, too.  He's a real champ in the car, too.

So we celebrated his birthday with a little vanilla ice cream.  Mmmmm...  Then, he ran around like a nut playing with his dad for an hour before bed, then..ZONK.  We carried him to bed!
Posted by Robin at 7:03 AM