As many of you know, Otto has been my studio buddy and my doggy inspiration for my art.  He died yesterday.  You all know how hard that is, I pick up the keys and .... no Otto with hopeful exitement that we're going for an adventure...

But it's hard to talk about him without smiling!  Otto truly was an bottomless pit of love.  He loved everyone he met, but had a special love for young men, being that they reminded him of his human "brothers".  He didn't know that some people didn't like pitbulls...until they met him!

And so enthusiastic!  No matter how monotous the chore, if we were doing it, Otto joined in with great gusto.  When we were picking up wood for a campfire, he realized what we were doing, and it was something he could do!  He ran into the woods and dragged out branches and put them on the pile.  Even getting ready to pack my vintage to ship, he happily shredded newpapers waiting for me to pack and weigh...because a trip to the post office was in the works.

He even loved a trip to the vet.  Dogs, cats, humans...all fun and interesting to Otto.  Car trips were his favorite, next to the water.  Nothing like a swim.  But no matter what it was, he wanted to be a part of it, and his excellent manners meant he could!

He had a summer of walkabouts, when he ran away several times.  Once, he ended up at our pizza shop, he'd been there before!  Another time he almost visited his human "brother" at work, just overshot it by two blocks.  Visited a church flea market, sniffing at the tables for something good before someone returned him.

His only hatred was of german shepherds, because he was bit by one when he was a puppy.  And...FIREWORKS AND THUNDER.  Boy, did he hate them!

He was protective (raced to stand between his dad and a mean dog), helpful, enthusiastic and cheery.  He brought us joy every minute because he was sooo joyful! 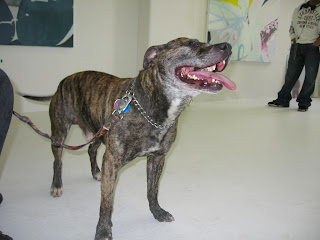 There is no way for me to explain just how wonderful Otto was...we will and do miss him, but are so thankful we were the lucky humans who got to share his life with him.  Love you, Otto!!!!

And I forgot to mention...every portrait I ever did, Otto supervised. He would put his head on my lap while I worked. It's hard to realize the next one I work on...Oh, Otto!!

this is a very touching post about him tho :)