Why I break ALL the rules for dog walking! 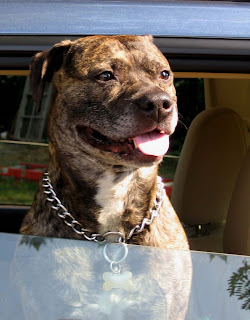 Yes, I break all the rules for dog walking!  I'm sick of feeling just a little guilty that I'm not a good dog mom because not only does Otto walk ahead of me, I let him out of the door first!  I know all the latest trends in dog behavior say you have to let him know you are in charge all the time, but I strongly disagree!  (I also feed him human food, every day!)

23 hours a day, Otto is in obey mode.  He eats when I feed him, he gets up on the bed only after invited, he gets to run outside in his backyard when I open the door.

For one hour a day, Otto is King.

His walk is his Big Adventure of the day.  He's almost 12 years old, yet he dances at the door when I tell him we're going, scampers out the door and prances down the sidewalk, tail wagging and ears flopping in merry motion.  He stops to sniff at all his "pee-mail" left by other dogs, trots back ahead and appears proud of his role as the leader of the fun, with head held high and a smile on his face.

Only when we are in a crowd do I shorten his long leash and expect him to walk next to me.  His whole demeanor changes and he becomes a solemn soldier, glancing up at me for direction, not pausing unless I pause.  (usually become someone just needs to pet him!).  At street corners, also, he solemnly waits until I tell him to "go ahead".

And I don't want the solemn soldier on a grim march.  For the length of his retractible leash, with the two exceptions I've named, he's the leader of the pack of adventurers!  It's a role he's great at!

And part of adventure is the tinge of the possibility of danger.  Who do you want there first, you or your dog?  Even my late, great Gussie, a tiny mutt terrier, was proud to be the first or second "on the scene" when something seemed irregular or amiss.

I don't want a dog who's natural tendency to run forward and investigate and protect is suppressed to totally being dependant on ME making their decisions for them 24/7.  When we walk down the cellar steps to go outside, Otto makes sure all is well for me.

Now, I did have to teach Otto not to pull and it took some time.  When he started to pull, I said "Uh, uh", tugged his leash, and stopped.  I made him sit and we just waited....  Next time he began to pull, same routine.  Early on, he did a lot of waiting!  Some days even now, he'll try and pull, but just a "uh, uh" reminds him that he will have to sit and wait and he lets up.

I also have no opinion on dogs with behavioral problems.

There's a hundred ways to reinforce to your dog that you are boss of him.  I just don't think that the walk should be one of them.

I'm pet portrait artist Robin Zebley.  I love animals, collect and sell quirky and romantic vintage , and am restoring our 1922 bungalow that was built as a summer house outside of the Philadelphia.  I'm so glad you visited my blog, and hope you'll make it a habit! Robin
,
Posted by Robin at 6:54 AM

I am with you, Robin! I can't see how being a "soldier on a grim march" would be much fun for either dog or person. Otto looks like a very happy and well behaved dog and that is all that really matters, isn't it? Great post!