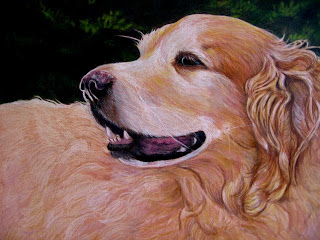 Aren't you sick of the daily polling for the elections? Now they have a half dozen polling companies, each with different numbers and all supposedly scientific.

Now, my polling for the most popular dog breed is totally unscientific! But I know that it's the Golden Retriever because I have done so many portraits of them. And their "owners" are so loyal to the breed. I know one woman who literally bought carpeting based on the shade of her Golden's fur! She clipped a lock and took it with her to the carpet store...and her house LOOKED so much cleaner!

But Golden owners agree they are worth the sacrifice. Now as far as drawing the golden, there's a couple of tricks I've learned from the dozens and dozens of Golden's I've been honored to paint in colored pencil.

First of all, there is no one shade of fur. I've painted fur that was almost white, it was so blonde, and then there's the redheads! And everything in between. And the shade really, really matters with the likeness. And they look very different as puppies.

Then, there's the length of fur. None of them have short fur, but some of them have LOOOOOONG strands! Also waviness..some are almost straight, some quite wavy.

And then there's that clump of fur near their ear that frames their faces...it's hard to see where that clump ends and the ear begins! So if you are a beginning artist, all the advice I can give you on goldens is to look, really look, carefully at all aspects. Unlike a dog like a pug, whose fur color, length, etc. aren't that different, each golden has a lot of variety and you have to study carefully to pull off a portrait that looks just like THAT Golden, not just "A" golden.

What they do have in common...every one that I've drawn...is pure love in their eyes that shines right through!

If you'd like to some of the other goldens I've drawn over the years, visit my pet portrait website! Just click on the boxer in a chair to the right to the right and near the top of this post. There's also goldens I've talked about here on my ARt and Animal blog, so click on the top of the blog where it says "ARt And Animals" and that will take you to the top!
Posted by Robin at 6:24 AM

I think they are gorgeous dog but I have only actually met one that didn't have some kind of aggression issue :/ We were always grooming Goldens at the dog groomers and their owners never brushed them :( The one that was brushed and groomed properly was owned by a couple of older people who loved the dog. I remember we had to shave one almost to the skin it was so matted :/

hmm getting carpet to match the dog is a great idea lol But if we get a black dog the room is going to look really dark like a crypt :p