How Art Won the World Series in Philadelphia 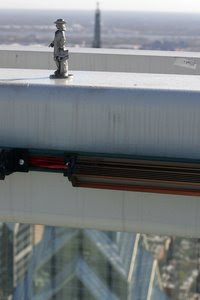 Yes! The Phillies' win last night of the World Series has us all absolutely on Cloud 9. Folks who came here from other cities whose clubs have won in the past are scratching their heads at the absolute delirium that we Philadelphia fans are in.

Because we sports fans haven't won a championship (although we've been invited to some of the dances...) since newer skyscrapers have been built taller than Alexander Milne Calder's sculpture of William Penn that crowns City Hall. There had been a "gentleman's agreement" that no building could be built taller than this sculpture.

We call it The Curse. Most folks blame it on William Penn, but I think the Calder family had a thing or two to say about it...

The Calder boys have history here, too. Alexander Milne Calder, in addition to providing the sculptures for City Hall, trained at the oldest continuously run art academy in the country, The Pennsylvania Academy of the Fine Arts http://www.pafa.org/School/27/(we call it simply "The Academy") with Thomas Eakins. So did his son, Alexander Stirling Calder, who sculpted the lovely Swann Memorial Fountain, just a short walk from City Hall. And finally one of , HIS son, Alexander Calder's mobiles hangs in the entryway of the Philadelphia Museum of Art. And all are in a straight line....from grandfather's art to son's to grandson's.

So when Philadelphia decided to break the agreement and build taller than the William Penn sculpture...the curse began.

Hockey. Basketball. Football. Baseball. The Calders made us pay. Calder art would not be topped by a mere building!!

But last night, everything changed. We won the World Series! And why? As a homage to the William Penn sculture atop City Hall, workmen glued a tiny replica of it on top of the newest, tallest skyscaper, the Comcast Building. And the Calders looked down and saw that art was again top dog....and let us win.

For my regular readers, please indulge my sports/art blabbering. For anyone new, you've found the blog of American Animal Artist, Robin Zebley. My website is http://robinzebley.com and if you'd like to see and read more about art and animals in this blog, just click on the heading at the top to go to the top of my blog. Meanwhile, I'm shopping for the parade tomorrow...in the shadow of the Calders.
Posted by Robin at 10:06 AM