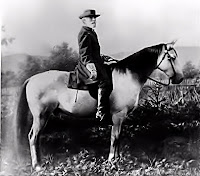 Vacationing in Virginia, while at the Lee Chapel at Washington and Lee University, we spotted apples on the ground...no, not an apple tree in sight. It was the gravesite of Traveller, Robert E. Lee's faithful transportation and companion!
Students left the apples for Traveller, and leave the door to his stable open, too!
Of course, as an animal artist, I was thrilled to read this description of Traveller by his "owner" to his wife's cousin, artist Markie Williams, which is the kind of personality/features description I love to get when painting someone's pet. Lee wrote:
"If I was an artist like you, I would draw a true picture of Traveller; representing his fine proportions, muscular figure, deep chest, short back, strong haunches, flat legs, small head, broad forehead, delicate ears, quick eye, small feet, and black mane and tail. Such a picture would inspire a poet, whose genius could then depict his worth, and describe his endurance of toil, hunger, thirst, heat and cold; and the dangers and suffering through which he has passed. He could dilate upon his sagacity and affection, and his invariable response to every wish of his rider. He might even imagine his thoughts through the long night-marches and days of the battle through which he has passed. But I am no artist Markie, and can therefore only say he is a Confederate gray.
– Robert E. Lee, letter to Markie Williams

Also of special interest to me in the Chapel museum, besides the Peale portrait of Washington, were small animal drawings by General Lee...an alligator and turtle!