﻿﻿﻿A day trip to the Philadelphia Flower Show!  All by myself because I want to paint flowers, too.  I see flowers as having personality, is that crazy?


Anyway, I wanted photos I took because when I started out painting and drawing pets, I needed samples and used legal, permissive photos of others.  While that worked out great, lots of others had the same idea and I saw "my" sample elsewhere.  So I want to use my own photos and was looking for some unusual English cultivars I wouldn't see in gardens here.
So off I went on a weekday morning, figuring it would be a little less crowded.  Wrong.  It was a mob scene.  It cost me almost $40, between Septa and the admission.   But England was the theme and I am very interested in English cottage gardens, especially heirloom roses. 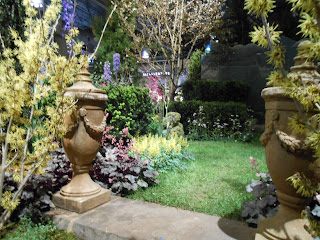 ﻿I didn't see many roses or cottage gardens or anything that wasn't commonplace here in Philadelphia and its surrounding area.  Forsythia.  Coral bells. Tulips. Daffodils, lots of daffs,  rhodys, clematis, sunflowers, yawn.  The above, for instance, is a garden I could see anywhere on my daily walk with Sarge, my boxer buddy.  Nuttin' special.
Maybe they were there.  It was really crowded and what made it really frustrating was that the judges or some other vips were cordoning off whole sections with humans holding cords to prevent us little people from disturbing them.  Now, come on.  Why can't that take place early or late, when the show is not opened?  Or at least while everyone is gone out to grab lunch?  Grr.
I heard comments that there were more vendors than exhibits.
And there were a lot of vendors and of course I bought some new african violet cultivars.  Now I need a dedicated place for them.  I replant them in vintage pots, tell you more about them another time.  And some bulbs.  I got some replacement bonzai trees for the ones I killed, trying again!
And I got some great shots of orchids, mostly.  Lots of fabulous orchids, since I fail at getting them to rebloom, I have to draw or paint them to "bloom" for me because I just love them!  There were other flowers and plants nearby that I never saw due to the judges-mobs.
Now, went last year when the theme was "Hawaii".  Maybe it was just a hard act to follow.  But I didn't feel magically transported to England, despite the British Invasion music, the mock landmarks and all the red white and blue balloons.  Not sure it's worth a trip next year.  :(
Posted by Robin at 4:25 PM