Happy Tears - Behind the Scenes on Location - Otto the Star!

Happy Tears, starring Demi Moore and Parker Posey, was filmed on location in and around Philadelphia...most of it right outside my home studio in my 1920s bungalow! It was just screened at the Berlin Film Festival, but late last spring, Happy Tears meant fun and chaos on our street, with bona fide movie stars strolling through the yard, snacking in my driveway and um....using the portapotty at the back of our property. Our neighbor's Victorian was the "house" in the movie.

Besides Demi and the very personable Parker (whose dog performed tricks for us neighbors) there was a mob of crew...you just don't realize how many people it takes to film a movie. Since I'm a pet portrait artist, I was really tempted to put up a sign, since besides the cast and crew, there was a sudden and steady stream of folks who just happened to stroll down their street with their dogs! 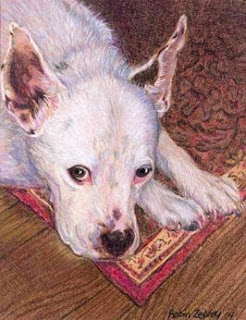 Through it all, Otto was the Star on set. He absolutely loved all the people, and HAD to be outside when they were filming. He learned to be silent when "Rolling" was called, but had a ball playing with the visitors. Don't tell director, Roy Lichtenstein, but I'm hoping we can hear Otto barking in the distance...I got him to bark while we were inside during filming one day. And he and I MIGHT have made the cut in the background during the rainy garage sale scene, while we were sitting on the porch.

I have lots more behind the scenes stories to tell, but in the meantime, come on by my pet portrait website: http://robinzebley.com . And if you'd like to see my whole blog, just click on the banner at the top. To be notified of new postings, click "Follow this Blog" to your right.
Posted by Robin at 10:12 AM

Hi Robin, I found you through Michelle, what a great story! It looks like he's asking for a walk!!