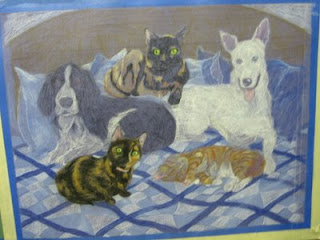 It might not look like it, but everyone here has gotten a few more coats of color via prismacolor colored pencil. But I can't go any further until I know what the rest of the piece is going to look like. That is, the background.

Actually, what I'm referring to as the background is actually the foreground and the background and the middle ground....everything that doesn't include the subjects! For some reason, many artists have no trouble rendering their subjects but are scared to death of putting their subjects into a setting. I don't understand that. I think about where I want my animals to be, and have made the decision before I sketch a thing.

A good foreground can lead the eye right into the heart of the piece, the middle will ground the subject/s and the background will frame them. Especially with pets, who are so often reclining, it gives energy to the piece.

In this case, Carol, these pet's mom, had her own ideas of the supporting background, but as I mentioned, I had to simplify the quilt. I could have "made" the bed, but frankly, I thought that wouldn't be very interesting. So I gave it some folds, yet kept a simple perspective that would tell the story that the pets were a little way away from the "front" or bottom, of the piece. I only use a few layers in the background, I don't want it too detailed and I let the blue of the paper play a part.

Since colors affect each other, it's important to get that background in early. I especially wanted to get the backboard of the bed (again simplified) in so that I could judge the values and colors of the animals who were right in front of it. Speaking of which, is the cat on the pillows in the middle.

The more I looked at this kitty, the more itlooked like an owl to me. What an annoyed look! told me that, so guessed that the annoyance was at having to pose for the camera. You know how when cats are annoyed their eyes just flatten on the top but not on the bottom? That's how this one looked. Was that part of this cat's personality or did we have reluctant model? I figured that if this was a really ornery kitty, Carol would have told me. So out came the eraser, this kitty was going to be drawn again from scratch, this time with the ears brought forward and toward the middle and the eyes rounded...an alert, relaxed look, not perturbed...and certainly not an owl!!

Next time, I'll tell you how I do the coloring for tortishell cats, tabby cats, white dogs and black dogs. Meanwhile, if you haven't visited my pet portrait website, come visit! It's http://robinzebley.com, click here!
And if you'd like to read my whole blog, just click on the banner at the top of this page.
Posted by Robin at 11:11 AM